In one of our recent articles, we covered the cost of a mobile application design and development. Fair enough, not all apps cost the same, so with this article, we’ll begin to unfold app types that are popular today and might be interesting business virtues. Finding out how they work and why open ways to contribute to the cultural phenomena that they are and hopefully take your shot at greatness.

In this piece, we’ll go through the dating apps layer, the unique and robust wonder of relationship genesis tool of the 21st century.

What originally started as a creepy hookup movement, now became a massive cultural phenomenon that has all the tools to change the way people will procreate generations to come. Not to mention the fact that sitcoms like “How I Met Your Mother” will forever fall into oblivion to only be revealed in a nostalgic burst as an artifact from the past where people actually met each other in the streets.

How to Create a Dating App

There’s a research saying, one-third of the marriages these days come from online dating. It makes sense that people meet online more than they do outside – you don’t have to constantly fight against your insecurities and social awkwardness, and there has never been a more subtle way to signal your liking to someone then swiping right.

People have been virally online on their social media for over a decade. We have a platform for everything you can imagine – a place to post a beautiful sunset photo you took, a place to file your resentment in 140 characters, a huge database to find out everything about people just by their name, we even have a weird app that puts dog ears on you and the one your parents will never figure out how to use. Technically of your social media allow you to find a significant other, just put in some time and be nice. But a separate mobile dating application you can specifically use to “find bae” and be sure that people you meet there are there for the same reason has changed it all. You don’t want to be the guy hitting on girls on Instagram, so forth come a dating app for your phone.

The actual term of “Dating App” is sort of inaccurate. You are not dating within the app. It’s just the means to let them know you are out there screaming for love. It’s just the simplicity and unambiguity of the process and the purpose that makes dating apps so viral.

It’s sort of becoming a thing these days to tell everybody you gave up Tinder because it’s superficial. I believe this only proves the fact that dating apps work. Whenever something becomes a sport, it this case the sport of collecting matches, it proves that it’s not a fad. Do popular dating apps have imperfections? Surely do, so let’s figure out if there are ways to create an app like Tinder, but make it karma-free and more in-depth.

Of course, the big T’s matching algorithm is private and protected. There is a clear goal of the app and there are different ways to get there, however, what makes a dating app addictive and engaging is the UX behind it. Tinder makes sure you stay on it and get hooked by showing most attractive people around you. There has to be an immediate response to your profile, as no one would stay there if no matches are coming in.

Another significant factor is the dating app’s usability and UI. If meeting people online is simple as swipe left, swipe right, the interface has to be appropriate. So let’s break it down.

User profile creation in the Amazfit app by Denys Nevozhai 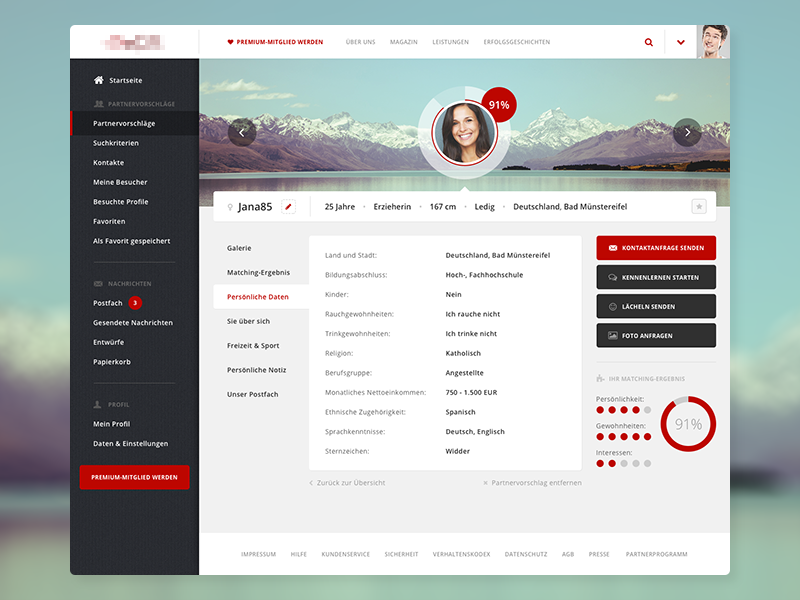 Those who see the popularity and the lucrative opportunities that social phenomena dating apps like Tinder provide, might consider their success as an ultimate recipe for a long and prosperous development. This could not be further from the truth. People are showing signs of fatigue from the shallow experience dating apps of today bring. In a couple years this market will be in need of a reload and it will require augmentation of today’s situation.

In order to not let the game pass you by, if you are having a dating app idea, make it not like Tinder, make it better than Tinder.

How to Hire Dating App Developers

We at Shakuro are always in search for new and interesting projects to work on. Have a dating app idea that can beat the current market? Let’s talk!