The Business of Design: Making Profit without Killing Passion

We had a project stoppage yesterday. These things happen sometimes and you can’t really develop a thicker skin for them. Every time you reach a deadlock with a client, you begin to question the foundation of your business process. 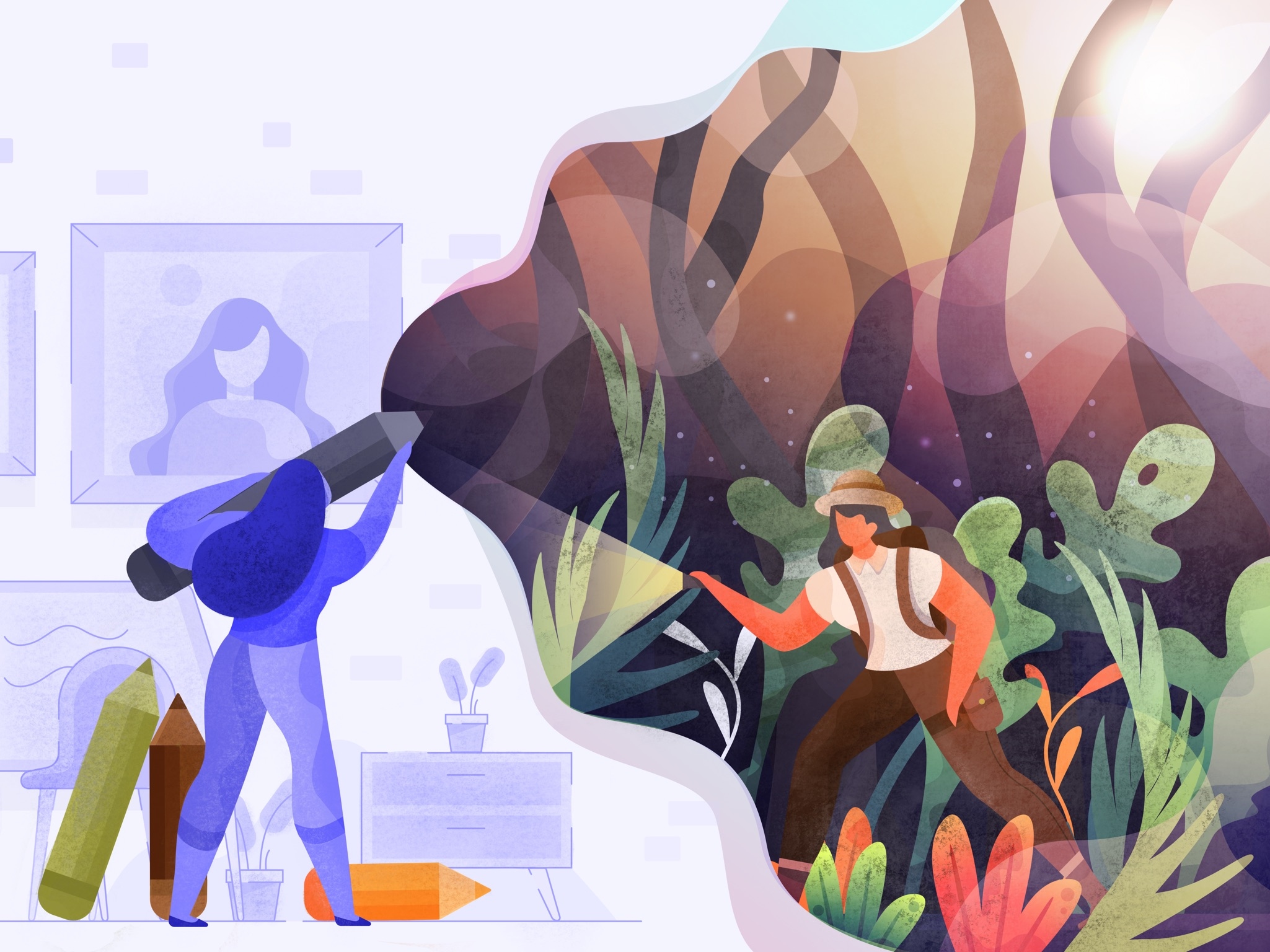 Especially rough are the stoppages at the design stage, which itself is the most sensitive matter in the project. It’s crucial for us to realize what happened and how to avoid it in the future.
Today, we’ll go through the business aspect of design and the balance between profitability and the passion for your craft.

The basis of design practice

We called design ‘sensitive matter’ because it always has a bit of personality to it. Even the most pragmatic engineered products are no strangers to some beauty and art. However, functional art is meaningful in another way and designed to bring profit to the business.

The work that precedes and follows design, has very little design-related aspects.

Because of that, some clients see design as a supplemental stage. A designer for them is a help, not an inherent part of the team. If it is a supplement, it can be removed. If it can be removed, it’s not as important. And not important means not respected. Yet, without design, there is no value and no attention brought to the right things. No subtle reminders that it was actually people working a website design that made it look the way it does. So why does such valuable work appear to be so insignificant when the business talk starts? We believe it’s about the manner of how design made its way into business in the digital age.

Recording artists make 8 to 10 percent in royalties for every record sold. A designer who created an artwork for that record is only getting paid once. That’s because the artwork is perceived as a one-time burst of creativity resulting in a static image. However, nobody addresses the process of creation that involves hours of iterations, band interviews, metaphoric researches, album studies, etc.

With that said, if an artist asks for royalties for every album purchased featuring their creative work, they’d be accused of extortion. It makes total business sense for a musician to charge for a one-time effort, yet designers aren’t taught to do business this way.

This is a hierarchical diagram of a design department in a digital agency. Inspired by Keith Granet’s diagrams from The Business of Design: Balancing Creativity and Profitability. 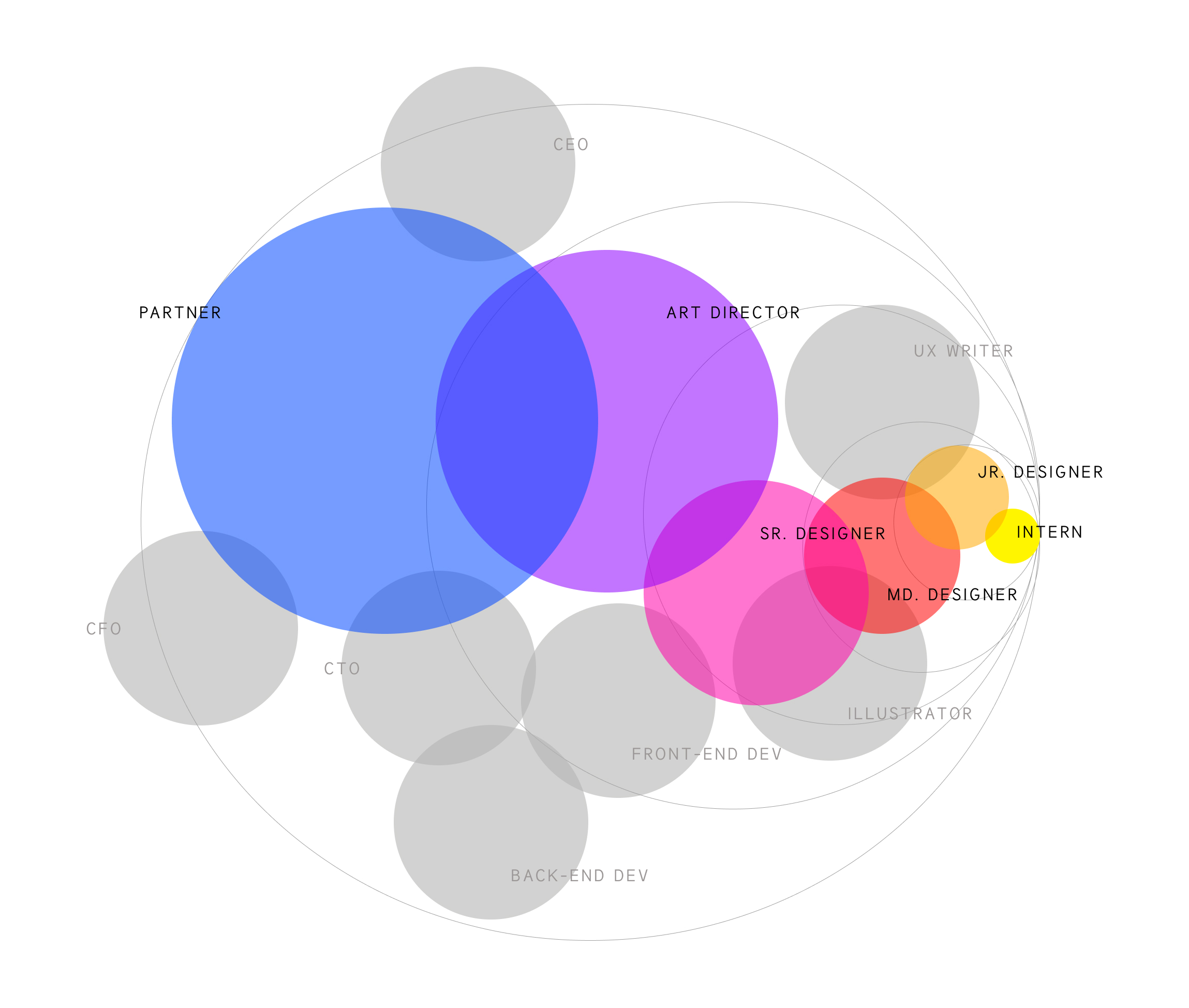 As designers move up the career ladder, they take on more business tasks than the actual design tasks. This leads to a situation where the business-savvy designers are detached from real projects and only participate in terms of art direction, while the ones making the UX prototypes and interfaces are the least concerned with business. Sometimes the PMs can save the game but this is not a reliable solution.

The only way to fix this is by having a healthy environment where people on the team will get inspired and learn from each other. This environment starts with a mission statement and follows through to the standards, workflows, and practices of a company. Being on the market is not enough. With the world economy being as unpredictable as it is, companies have to switch between the survival and growth modes sometimes within one year.

If design is treated as a supplementary feature, it is the first to be cut and the last to be added.

To break the vicious cycle, design has to become a business practice, not just an art. Business is prepared for whatever comes. It is shock resistant and agile when needed. The artistics won’t go anywhere if the design business can push through adversity.

The business value of design

To formulate the business value, we have to have a clear understanding of what success looks like for everybody involved. If we focus on design for business, does this mean we give up on the design-dictated decisions? Or do we push through and convince the client to trust the design and give it time to convert?

However, if you look closer, the division becomes not so clear. The idea we’ll illustrate next has been beautifully explained by Damien Newman and known as the design Squiggle:

To start designing, we need to get ourselves familiar with the business. We do the Research to learn how the feature or the product, or the industry works. So before, design even starts, business goals dictate the pace.After the business logic of the product is sort of clear, it’s time for the clean-up so that the users won’t have to go through the same gruesome discovery process we did. This is how the Concept is born. But the concept itself is not viable. It has to become sexy for people to start caring and usable for them to know what they are doing.

We then convert the concept into the Design which did not come out of nowhere. So when did the business end and the art began?

Design does not oppose business. It transforms it into a viable form.

This is not only about physical and digital products. Once designers create better interfaces, they can take it to better user experience. And once they perfect the UX of a single organization, they can contribute to the holistic experience of the entire industry, economy sector or even country. It’s a long way not only for a designer to grow as a professional but for the stakeholders’ acceptance of the role of design as well.

How design affects the economy

Traditionally, design is considered to be a huge part of the design-driven industries only. Like, cool website designs are only for web designers. So if you run a business which is far from the creative and cultural industries, design won’t matter much. This is an old misconception that does not withstand the current data argument. Forrester has conducted a research that says, companies that invest in UX, lower their customer acquisition and retention costs, as well as the support cost, and increased market share. Design increases turnover, so for every $1 invested in UX, businesses can expect $100 in return.

After Walmart redesigned its website, they saw a 200% increase in visitors. Truck Works redesigned the brand to see a 49% revenue growth. IKEA made its website shopping as human and interactive as their stores to see a 12% revenue increase. JavaPura coffee roasters had a whopping 21% leap in revenues six months after the redesign.

This resulted in almost half of the digital and hardware startups attributing their rapid growth to design. The same with enterprises, the bigger the company and the turnover, the higher the rank of design in their operation. To illustrate the impact design has on the economy, check out this diagram inspired by Design Council: 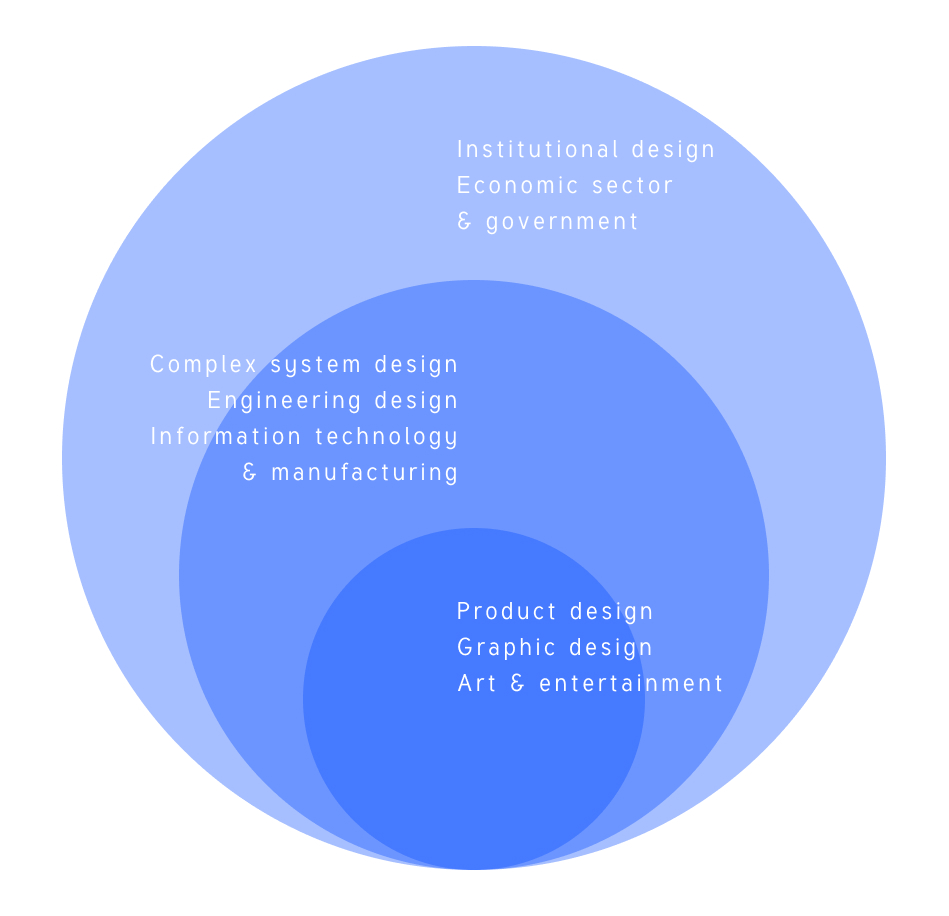 If design doesn’t bring profit, it’s decoration. The decoration has its own purpose which might not be direct revenue. However, good design doesn’t get broken down into parts. It is wholesome and solid.

Companies that see design as the main asset of their business management, outperform competition in terms of new product introduction, market share, and international growth.

The problem with this type of business management is it can only be achieved through trial and error. The business of design is not something they teach in design schools.

Because of the lack of knowledge in business analytics, metrics, and vernacular, designers have a hard time explaining the value they bring. Sometimes it shines through but mostly, a designer has to present their work and give the reasoning for the design decisions they’ve made. Big design companies have developed their own ways of presenting design and it’s rather arrogant. Smaller companies must back their decisions with cold facts. What’s more important, these facts have to represent different business outcomes. This is where A/B testing in design can play a factor.

If the design does not rely on factual data, it starts to feel like art which is always subjective.

Our project stoppage was a direct result of a confusion between the poorly explained business value and the subjective decision. Something to work on. Measuring design is a business practice that will secure the work we are doing or steer us in the right direction. 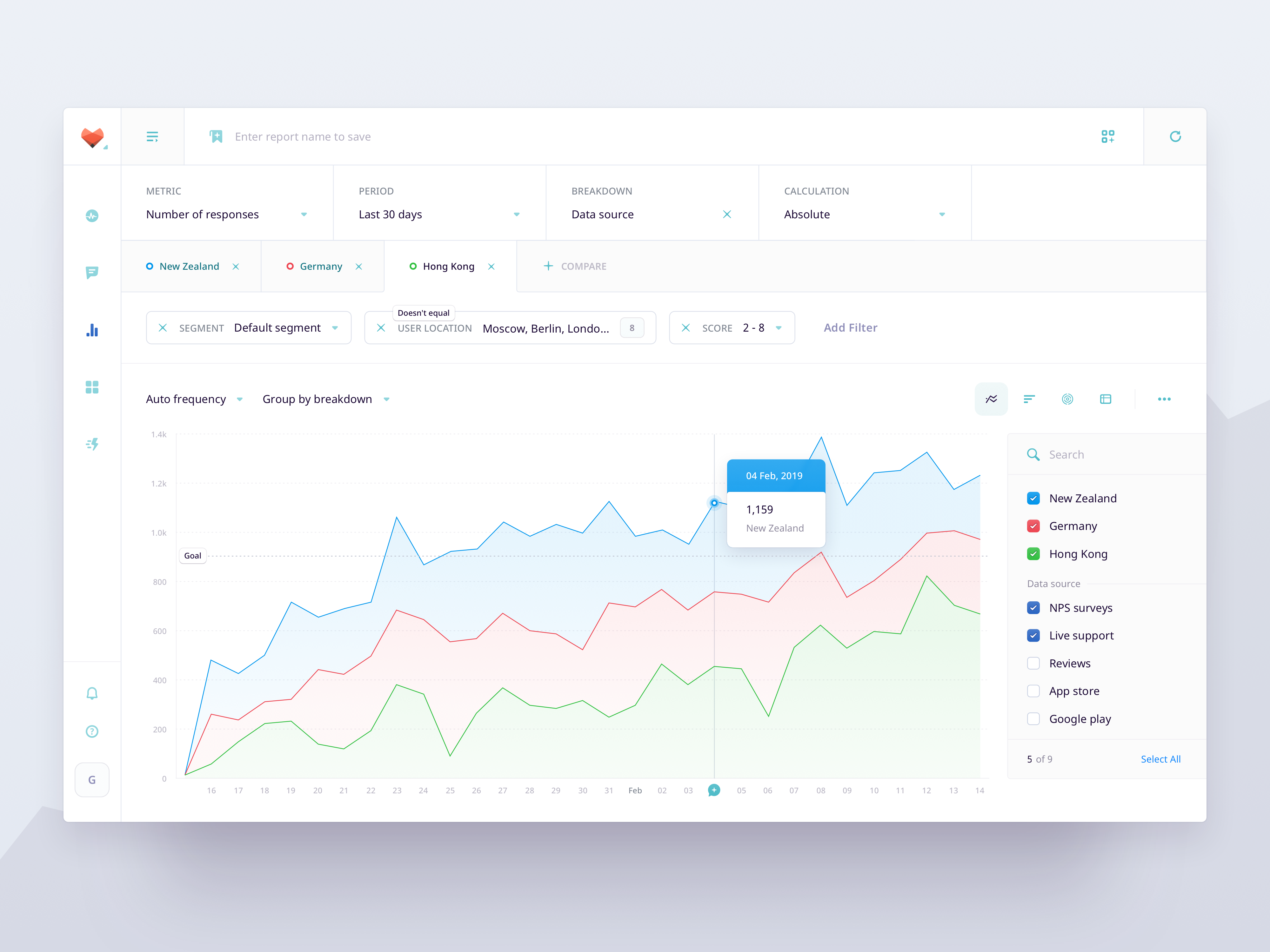 The humane value of design

Not everything can be measured. The reason why people either glorify or depreciate design is because it provokes feelings along with the financial consequence. And if we drift into the waters of measuring emotional value, we’ll end up far from design and the business goals that got us there in the first place. Peter Senge said:

“Companies who take profit as their purpose are like people who think life is about breathing. They are missing something.”

The curse of any design and development agency is being torn by the desire to make purposeful products and the technical, financial or whatever limitations. Designers don’t do it for the money.

Doing business for the money means optimizing the input to get maximum output. That’s not what designers do, not in the least bit. Quite opposite, they go through countless iterations to deliver a result that would not only satisfy a client but also make the world a better place one button at a time, help someone, make someone smile…

Design-driven business performance comes from the purpose of creating value rather than selling it.

Leonid Feigin from the DDVB design agency told a story in one of his YouTube talks. The story that sends shivers down the spine, and makes you want to forget it and never think about it again.
They had a branding client come to them one day. A client that had difficulty finding a design team to help them. The client was a non-profit palliative care center for children. Palliative care is a help for people with life-limiting illnesses. In their case, kids and their parents. Business-wise there was not a lot to ask for, still, DDVB took the task and here’s what they’ve designed. 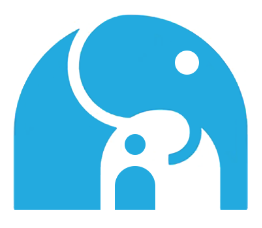 This is an elephant with a hole inside. The hole is in the shape of a little elephant. The hole that can’t be cured and filled. The hole to live with. The identity that DDVB created tells a tragic story but it also gives hope. The center helps terminally-ill children but it exists for the parents. The people who work there share the neverending pain and take away at least a part of it. I took away a part of it while writing this. I’m sure you are taking away part if it as you are reading this.

This is not the design you can measure with ROI. Design is not always the territory of business. Not everything is business and design is there to constantly remind us about that. Design is the way you look at the world and the world means people. Sometimes it is worth it to sacrifice the business value in favor of doing something for the people. For the love.
Update: the project we spoke about has just been restarted.